Last summer I was growing these cultivars. They both make very large fruits. Tahitian is Cucurbita moschata; Banana is Cucurbita maxima.
In the picture below,Tahitian is the curved one on the top. 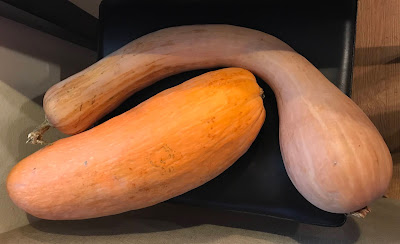 I was very impressed with the flavor, texture, the speed of cooking (very fast) of the Tahitian squash.  It is probably the sweetest squash I ever had.  It also stores pretty well. I am eating it in late January. The flesh is intense orange in color, and it smells fresh and fruity. I am looking forward to growing it again. 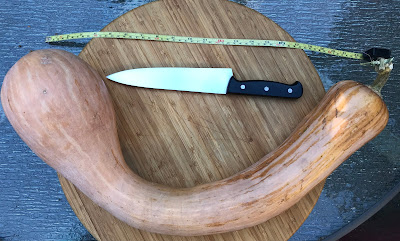 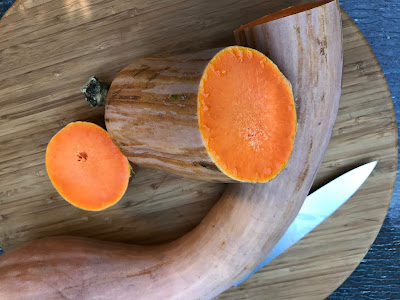 On the other hand, I was very disappointed with Banana squash.  The first thing that hit me, was the very bad smell from the cut fruit. I hoped it will disappear after storage. Unfortunately it is still present in the fruit cut in January.  There is no good flavor or sweetness in this squash.  Nobody in my family wanted to eat it.  The flesh is yellow, firm, and requires longer cooking than Tahitian squash. 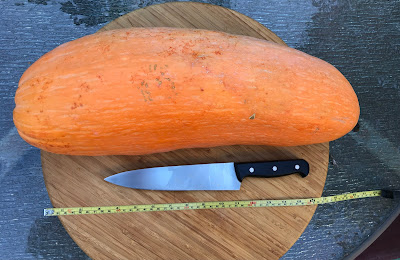 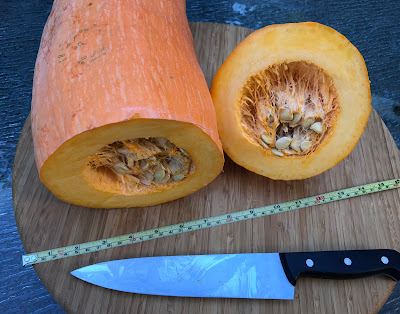 I am not going to grow it ever again, but please comment if you have a different opinion about Banana squash.
at January 29, 2021 No comments:

For winter grafting of deciduous trees the wood should be collected in December-January.  Some late developing trees like persimmons and nuts can be harvested later.  The stone fruit trees can start developing in February already.  The dormant wood is required for grafting, make sure to collect these early in the winter.

Pom fruits and stone fruits can be grafted in January - March.  Cherry wood does not store well and can start pushing buds in the fridge.  Make sure to graft these early.

Below are the images of the same tree.

One year after grafting 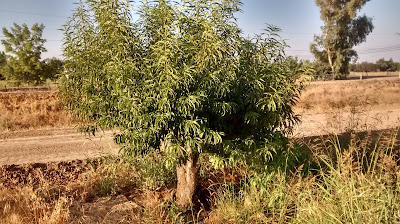 One month after grafting 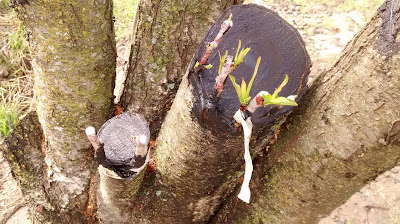 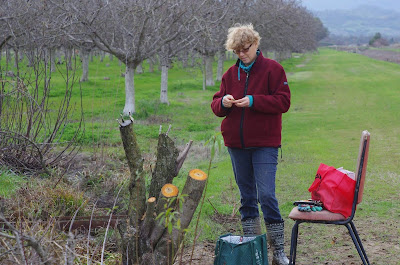 Persimmons, figs, mulberries, paw paws, che, jujube, nuts should be grafted later, in late February - March when you see the first movement on the rootstock.

Feijoa is a special case of evergreens and can be hard to graft. I had a good experience grafting them in ground in early April.  However grafting later in the season especially right before the heat waves reduced my grafting success.  Grafting onto the in ground trees is always more efficient than grafting potted plants. The latest trend is to graft them in February. This is my plan for this season.  Feijoa wood collection and grafting can be done at the same time, regardless of the season. Feijoa wood also stores well in a fridge for a few months.

Avocado, white sapote, and citrus grafting almost always works for me, but the best time is early spring, March - April. These do not store well in the fridge, and I try to use them in under a week time.

The type of grafts does not seem to influence my success rate.  I mostly do clefts, bark grafts, and chip buds. Connecting the cambial layers as perfect as possible at least on one side is very important. 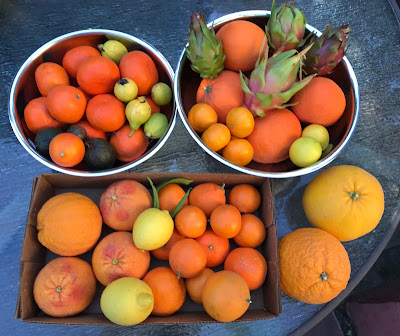 Citrus is the king of the winter fruits here. I have a number of earlier posts on various citrus cultivars with their ripening times. Here I have 5 different mandarins, Early Navels, Vainiglia Sanguino acidless oranges, Kyomi tangor, Cocktain grapefruit, and two different kinds of limes.

Besides citrus, I have tropical guava and dragon fruits now. I think it should be possible to have white sapote fruits in January too.  I picked all mine in December, but my trees are young.

To my surprise, I am still picking dragon fruits and they are ripening just fine. This winter is very mild so far. Below are Sugar Dragon (left) and Halley's Comet. 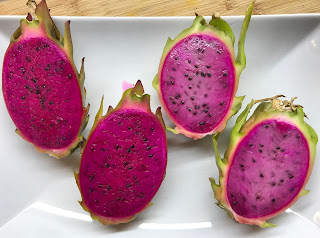 Other options for January fruits would be very late persimmons and very late kiwi.  I hope to get some of these fruiting in a few years.

By now I have fruited three different golden (yellow) kiwi accessions. My oldest female is the result of the grafts I made in 2016. The scions came from a member of Santa Clara Valley (SCV) chapter of CRFG. Someone brought a male and a female cuttings of golden kiwi for one of the regular meetings at Prusch Park.  These ones I keep under "SCV golden female" and "SCV golden male" names.  They both are grafted onto the same Vincent female of fuzzy kiwi.

Later, in the same year, I came across the seeds harvested from a yellow kiwi with red center.  I planted 14 seedlings in 2017. A number of males and one female bloomed in 2019, but no fruits were made that year. In 2020, two females bloomed and both produced fruit. None had red center, but both are exceptionally sweet.  I was not planning on releasing the material from them this season, as I wanted to evaluate them better. I am releasing them early, as both fruits seems to be better than the "SCV golden female". I do not have data on productivity. Keep in mind that these are EXPERIMENTAL and all I have is the observation of few fruits in one season! These females probably need their own male.  I do not know if SCV male will pollinate them, but their blooming times overlap.  They all bloomed in early April in Vacaville, California. The scionwood of 5 accessions will be available at reallygoodplants.com

The fruits are very late, December harvest.  They are good, but not as complex as the ones we get from Zespri kiwi packs. 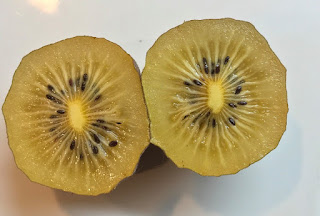 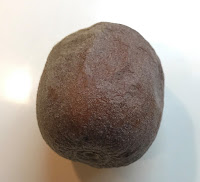 They still have some fuzz on the immature and developing fruits. 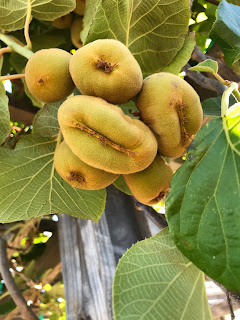 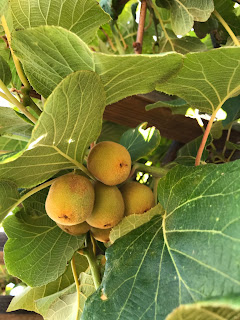 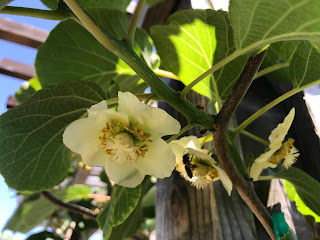 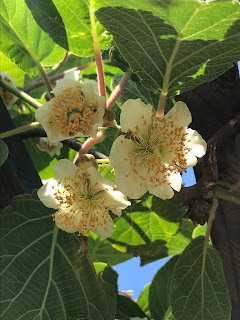 The foliage is very ornamental with a lot of red colors in the developing shoots. The amount of red color in the foliage varies between seedlings.  Some male plants had pink flower petals. 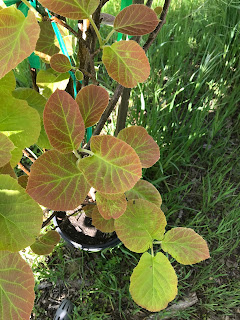 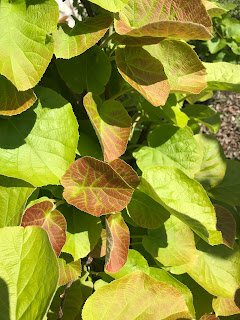 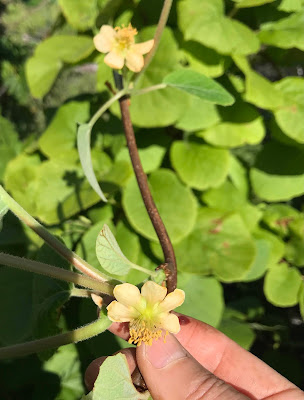 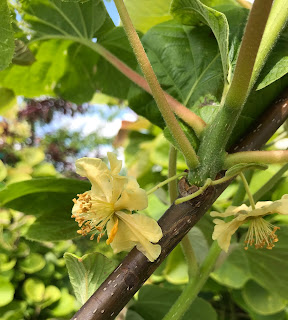 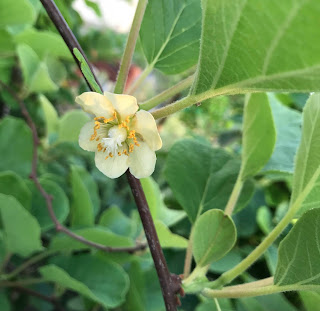 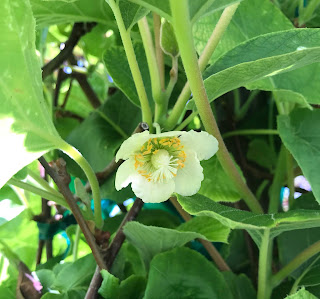 I only had one fruit this year, it ripened in mid-October and was exceptionally sweet and flavorful.  It is small in size and fuzz-less when ripe. 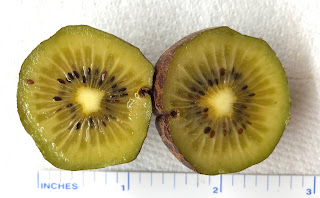 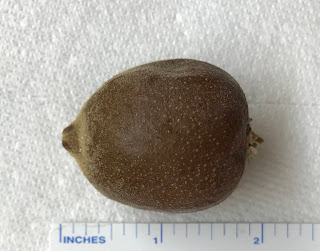 I had 5 fruits on this plant, but I started picking them early, and the first 4 I picked were not ready.  The last one picked in late November was kept for too long on my kitchen counter and shriveled.  Never the less, it turned out to be an exceptionally sweet and flavorful fruit.  The flesh seems to be greener than #1 and the fruit seems to have more fuzzy skin. 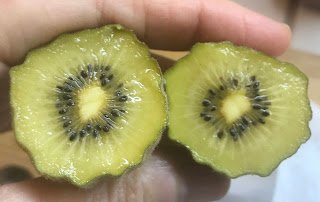 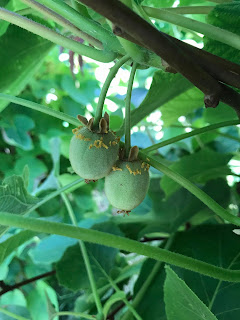 This is a summary of my personal experience with rooting different mulberry cultivars. 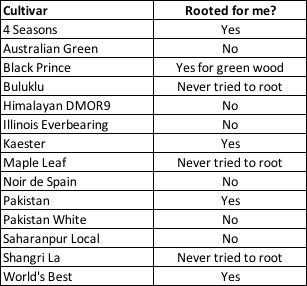 Plants and cuttings from these cultivars are occasionally available at reallygoodplants.com
at January 01, 2021 4 comments:

Kaester can grow into a large tree.  There is an old tree at the Prusch park in San Jose. Most likely, my tree has originated from that tree in San Jose. The fruits are very good in flavor, ripen in July. The tree requires regular watering.  They don't grow as fast as the white or macroura species do. The cuttings can be rooted, and they graft fine onto alba cultivars. 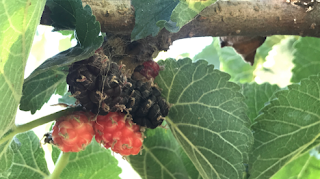 Noir de Spain maybe a smaller tree than Kaester.  The fruits are excellent,  very complex, ripen in July.  They might be a bit juicier than Kaester, but otherwise very similar in the flavor. I failed to root cuttings from this tree.  However it grafts easily onto the white mulberry. 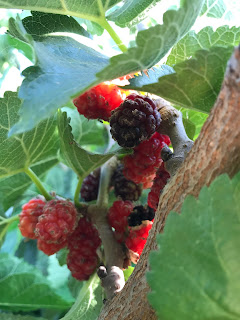 This is a recent introduction by the Hybridizers Group of SCV chapter of CRFG . This is an excellent yellow nectarine. Very sweet and juicy... 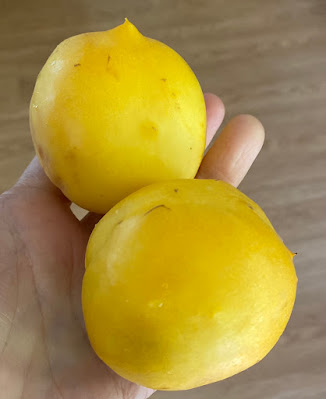