I found 14 accessions that made the fruitlets this year. I don’t expect all will hold the fruits to the maturity as some are recent grafts or new trees. Today we expect to reach 100F, and tomorrow we are up to 110F.

Plenty of fruits on my old tree. I suspect most will make it through the Thursday heat of 110F. 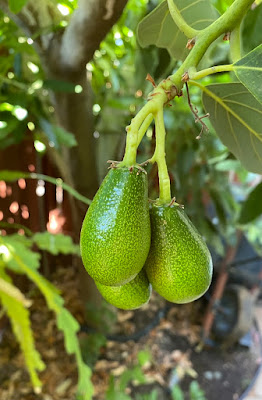 Not a lot of fruits this year as I had to prune these branches significantly. 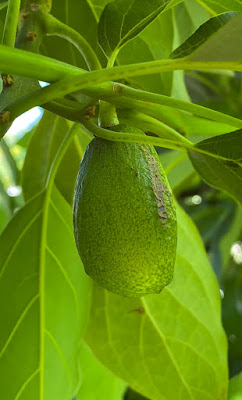 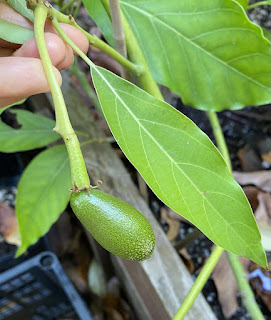 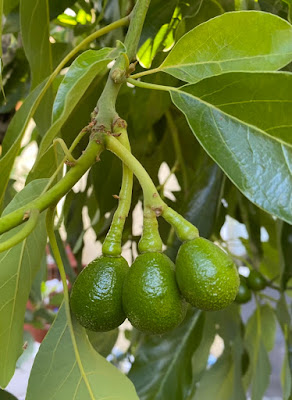 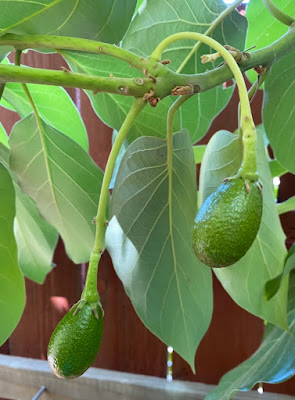 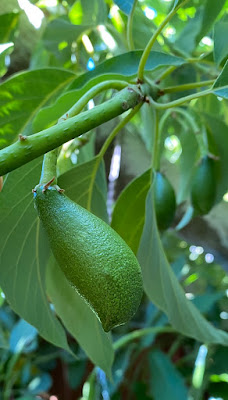 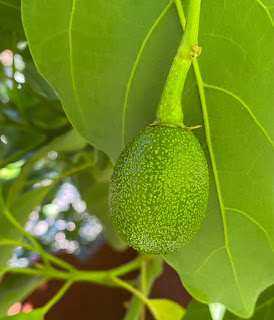 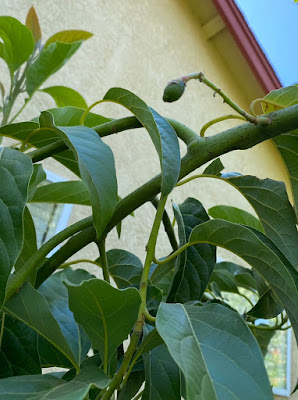 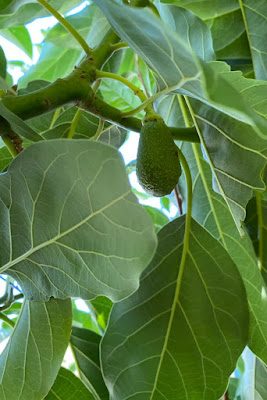 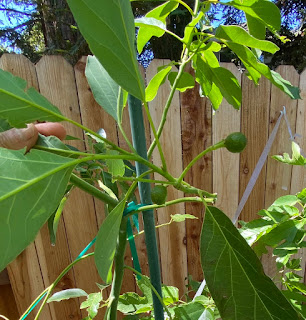 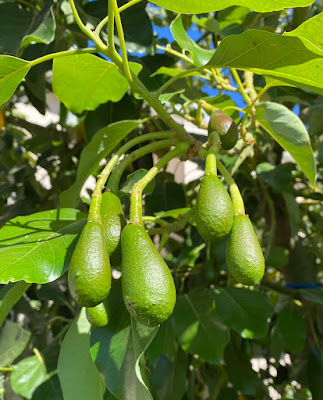 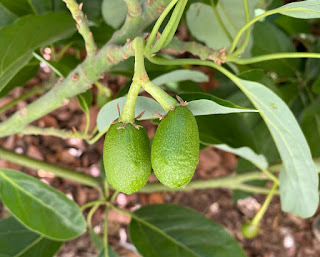 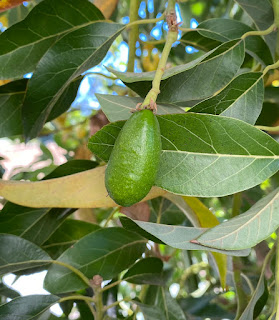 I missed to collect the Strawberry loquat fruits when they were perfectly ripe. The ones I have here on the left part of the picture are past their prime. No detectable acid here, sweet fruit, mostly of a baked apple flavor.

Argelino fruits just reached their peak ripeness stage. These are probably the most flavorful loquat I have, with an excellent sugar and acid balance. Apricot-grape and maybe even mango flavored. 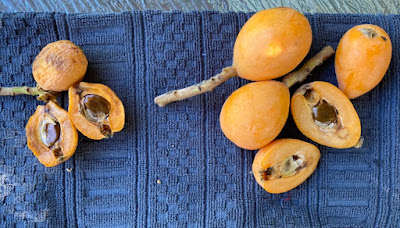 All these four selections are very good loquats. All are growing on the same combination tree in Vacaville, California. 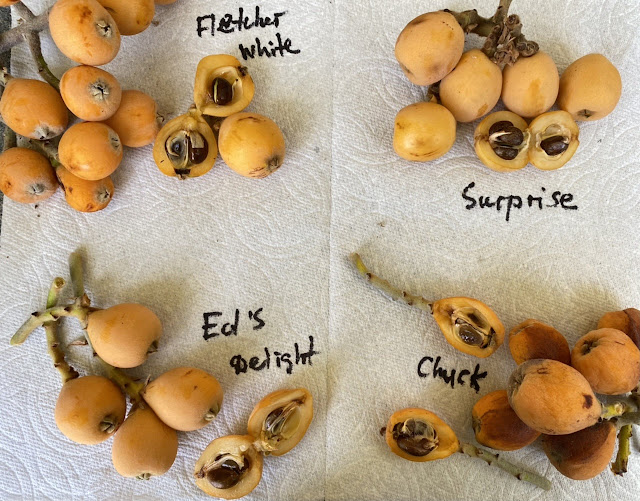 Ed's Delight is still very good, but now at the end of its peak ripening period. Very sweet with a little acid, soft, juicy, pear flavored.

Surprise is at the peak ripeness now.  Very sweet and very juicy with some strawberry-apple notes.

Fletcher White Many fruits are ready, some will need more time. Sweet with a good amount of acid, grape-pear flavored, juicy.

Back in December of 2017, I ordered scions of 12 sour cherry accessions from the USDA Geneva (NY) station. They arrived in early 2018. I also collected some additional cultivars from the local gardening friends. In total, 16 different cultivars were successfully grafted and planted in ground in the early 2019.
They are:
Almaz
Balaton
Belle Magnifique
Bianco Rosato di Piedmonte
Csengodi Csocros
Danube
Duke
Favorite
Oblachinskaya
Pamjat Vavilova
PV1
Shatten Morelle
Studencheskaya
Sumadinka
Tamaris
Vladimirskaya
For the rootstocks, I used Mahaleb, and a few Adara stocks.
Few accessions were also grafted onto in-ground trees:
Almaz -> Adara Intersteam -> Shiro plum
Belle Magnifique -> Adara
PV1 -> Adara
Duke -> Adara Intersteam -> Shiro Plum
Sumadinka -> Royal Rainier sweet cherry
The first to fruit were the grafts made onto in-ground trees. I got few fruits from Almaz and Duke already in 2019. Belle Magnifique and Sumadinka started to produce in 2020.  Sumadinka seems to be the most productive with Belle Magnifique coming in a close second. Now in 2021, Duke and Almaz produced just a few fruits, and this might be due to the short Adara intersteams.  I used just ~4 inches of Adara, and I should have used a foot of it. These grafts reside on my Shiro plum, and they stopped growing.
Sumadinka on the other hand is taking over the Royal Rainier cherry, and now this graft represents most of the tree. The fruits have very typical sour cherry flavor, see them in the picture below. 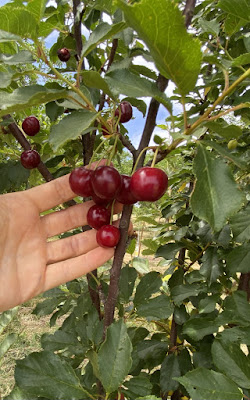 Belle Magnifique fruits (picture below) taste sweeter, as they are a selections of a hybrid Duke cherry. 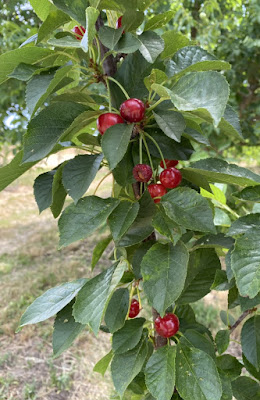 However, Belle Magnifique fruits (the right fruit in the image below) are a little smaller and lighter than Sumadinka (the left fruit in the below image). 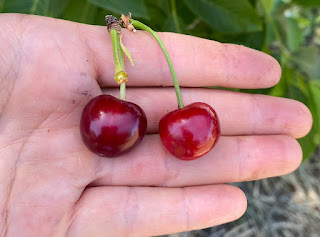 Duke is a relatively large and “sweet” sour cherry as it’s a sour-sweet hybrid. 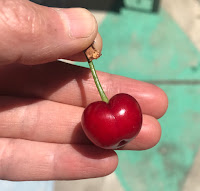 Almaz is a light colored cherry with transparent juice. I only had a few not fully ripe fruits and do not have an opinion about this accession yet.
From the newly made trees, only Sumadinka, Balaton, and Oblachinskaya made few fruits in spring of 2021. I will need a few more years to figure out which cultivars perform well in my area. Sumadinka and Belle Magnifique seem to be the most promising, as of now.
at June 06, 2021 2 comments:

Blueberries turned out to be one of the most challenging plants to grow here in Davis. This was until about a year and half ago, when I followed an advice to grow them in large pots. Last year I already had some berries from a couple of my potted plants and today I picked a bowl from each Reveille (left) and Southmoon plants. 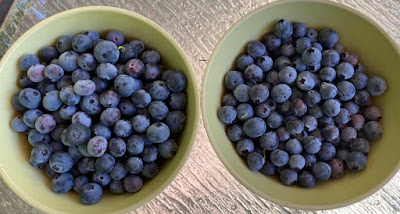 The Reveille fruits seem to be larger and sweeter than Southmoon, but this could be due to the sunnier location. This plant has almost full day of sun: 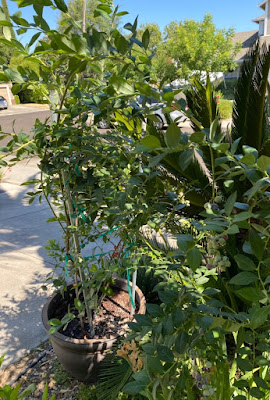 While my Southmoon plant is mostly in the shade: 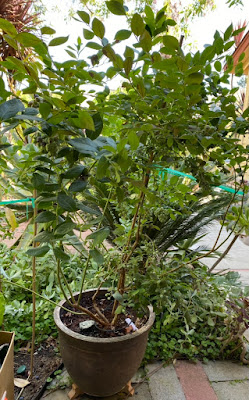 Both plants grow in a peat moss rich mix with added sulfur and occasionally get a balanced fertilizer.

I found 14 accessions that made the fruitlets this year. I don’t expect all will hold the fruits to the maturity as some are recent grafts o...