Adara is a Prunus cerasifera selection with a wide range of compatibility with various Prunus species. Adara is also known as Puente, which is a trademarked name.

Adara is mostly used as intersteam for grafting cherries onto plums.  First, graft Adara onto plum, then graft cherry scions a season later.  It is possible to do both grafts in the same season as I described earlier.

Adara can also be used as a rootstock and tolerates a wide range of soils.  I have a very good experience using it in heavy clay soils as a rootstock for sweet and sour cherries. The only problem I see with some vigorous sweet cherry selections is that they grow wide faster than Adara rootstock. In the picture below, Coral (left) and Lapins sweet cherries grafted on Adara at 3 years age. Grafting low maybe a better option, especially for vigorous cultivars. 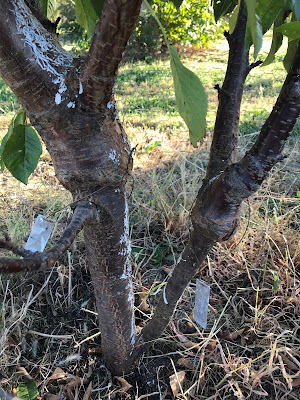