In 2014 I decided to germinate the seeds from the fruit I got from the garden of Edgar Valdivia in Southern California. In 2015 I planted six seedlings by the Western fence in my front yard in Davis, and another five seedlings at the Vacaville farm. While I got the first fruits from my Davis seedlings, these were shy bearers as they only get the sun in the afternoons. In 2020 I didn't get a single fruit from my Davis kei apples.

The first Vacaville tree to come into fruiting was female #4 in 2019. It could be just a dozen or two of fruits last year.  This year, the tree was very fruitful with hundreds of fruits.  The fruits of this tree are unusually sweet for a kei apple.  They still have acid, but they can be eaten easily in large quantities. We started picking the fruits in September and there are still some on the tree in November. Two pictures below are from female #4 taken in September. 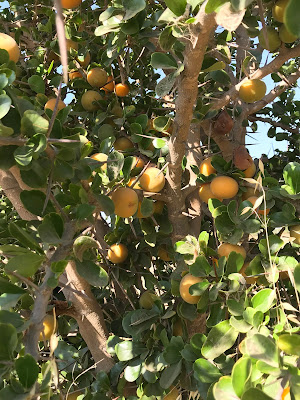 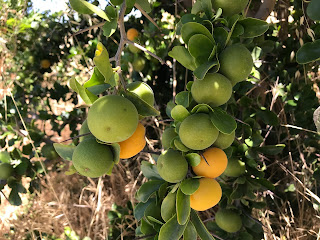 Females #1 and #2 produced just a few fruits this year. #1 has unusually dense flesh and more flattened shape than an average kei apple. Below are the fruits I tasted on November 15, 2020.

#1 fruit is very dense and almost crunchy. Definitely a desired characteristic as it will allow for better storage.  The flesh is darker then the other two fruits. This fruit was not as sweet as the fruit from this tree I tasted in September. September fruit was sweet, this fruit was sour.
#2 fruit is more juicy than #1.  The fruit is typical and sour, like a regular Kei Apple fruit.
#4 fruit is significantly sweeter and juicier than the other two fruits. Still, the fruits from this tree seem to be less sweet in November that they were in September.  We already had couple of frosty nights in Vacaville, and this could have affected the accumulation of sugars.
I have a tasting video made in September. This is for mostly #4 and just one fruit of #1:
Everyone who tasted the fruit from the seedling #4 liked it, so this is a good candidate for growing it more widely.  The tree got a VIP treatment yesterday, as I pruned it to a nice shape that should allow for easier access to the fruit in the following years. 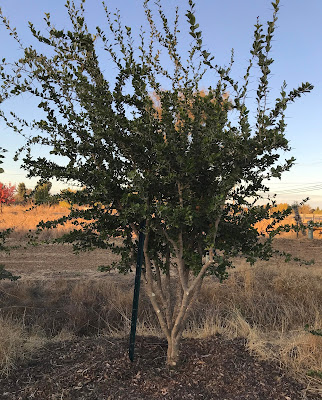